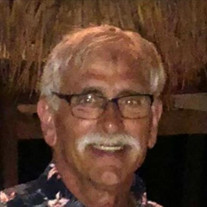 William (Bill) Peter Sutch, 70, of International Falls, passed away on December 13, 2021 at his home. Bill was born in Littlefork, MN on January 6, 1951 to George and Ann Sutch. He grew up in International Falls and graduated from Falls High School with the class of 1969. He was united in marriage to Wendy Green on August 26, 1977. Bill began working at Boise Cascade after he received his degree from Eveleth Vo-Tech in Instrumentation. He thoroughly enjoyed his career at Boise within process control, where he worked for 41 years. An avid outdoorsman, Bill enjoyed hunting, fishing, golfing, and spending time at the family cabin in Fort Frances, Ontario. He was a jack of all trades and problem solver. Often times you’d find Bill working on projects with his best friend and lifetime companion, Wendy. She had all the ideas, and Bill made them come to life. More than anything, Bill’s family and friends were the love of his life. He looked forward to gatherings and was always there for the kids sporting events as a coach and fan. Bill was selfless and always put others first. He’ll be remembered as patient, loving, and truly a servant to all. Bill was proceeded in death by his parents. He is survived by wife, Wendy; sons, Nicholas and Jared (Kristin); daughter, Alyssa; granddaughter, Baylor; and his walking companion, Annie. Bill grew up in a large family and is also survived by his siblings, Vivian Sutch, Bob Sutch, James Sutch (Linda), Jean Hilfer (Jerry), Thomas Sutch, and Marianne Trask. In addition, he is also survived by his mother-in-law, Bunny Green; and brother-in-laws, Chuck (Diane) Green, and Kelly Green. A private celebration of life for Bill will be held by his family and friends.

William (Bill) Peter Sutch, 70, of International Falls, passed away on December 13, 2021 at his home. Bill was born in Littlefork, MN on January 6, 1951 to George and Ann Sutch. He grew up in International Falls and graduated from Falls High... View Obituary & Service Information

The family of William Peter Sutch created this Life Tributes page to make it easy to share your memories.

Send flowers to the Sutch family.